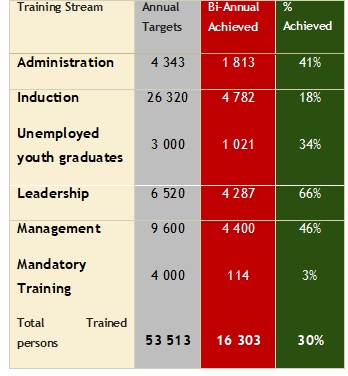 The 2019/20 financial year started rocky with low performance after the good performance by the NSG over the last couple of years. By the end of quarter one 4 053 persons were trained by the NSG against the target of 9 160 in all training streams. Quarter one had several challenges including the upset caused by the closing the previous financial year and the beginning of the new financial year; the delays in planning process that saw targets being finalised only after the appointment of the 6th administration to Parliament and the general elections year. Performance generally became slower as departments were non-committal pending the elections and the anticipated changes in departmental configurations and leadership.Nonetheless, positive attitude was maintained trusting the second quarter will bring about the necessary enthusiasm to train more public servants and the assumption that departments are settling with new leadership and the overall tone of performance improves.

The second quarter ended with 16 303 persons trained against the target of 26 500. For performance to be considered average, the NSG should have trained at least 26 500 which would represent 50% achievement against annual target of 53 513. However, the recorded performance as at end of September was only 30% of the annual target set. This slow performance is going to put strain on the consolidation of targets in the last half of the financial year.

All streams must at this time of the year be at least 50% or above to ascertain the achievement of their targets by end of the FY. Of more concern is the Mandatory Programme with an achievement of only 3%. Plans are however in place to drastically improve mandatory numbers as the NSG has concluded a MoU with North West province to ensure over 3 500 public servants are trained by the end of the financial year. Similar interventions are necessary for all the streams to show better performance.

In considering all other targets outside training numbers performance is relatively lower than usual, see below. The NSG has not over the last 3 years achieved performance below 70% in any performance cycle, it should therefore be concerning to see this trajectory. For the 2nd quarter, only 16 targets have been achieved against 27 targets. One target was marked as demand driven and therefore remain incalculable. The overall performance achievement therefore translated to 62%.

Performance highlights are worthy to be mentioned though under the radar of underperformance. This includes the NSG partnering with DPME in the introduction of the Revised Framework for Strategic Plans and Annual Performance Plans (SP 2020-25 & APP 2020/21). The intention is to further improve government planning systems and processes and to mainstream development planning in government. Theory of Change (ToC) was identified as a tool for the development of SP & APP and resulted in 677 delegates trained by the end of September. The partnership was good as it gave the NSG the platform to have exclusive privilege to train this course. With the NSG trying to extend reach of public servants, the first module of the Local Government  Development Programme (LGLDP) was successfully delivered for the

City of Johannesburg in September. The LGSETA has also appraised the eLearning component of the programme and preparations are underway to ensure assessment and moderation processes are in place.

SG kick-started the rollout of the online Pre-Entry Programme for Senior Management Service – Nyukela with the programme going live on 15 July 2019, as a compulsory offering in response to the Directive on minimum entry requirements for the SMS.In efforts to continuously increase capacity of the facilitators with particular interest in CIP, all streams conducted training of trainers (ToTs). Four ToT were organised for CIP 4-5: Eastern Cape Provincial Trainers, CIP 4-5: National Departmental Trainers; CIP 6-12 Module 1: National Departmental Trainers; and BB2E: National Departments Lastly, in an effort to expand the development opportunities that the NSG offers to all levels in the public sector, a course aimed at levels 4 and 5 employees, “Making performance my responsibility”, was finalised and approved. The roll out of this new offering will commence from Quarter 3