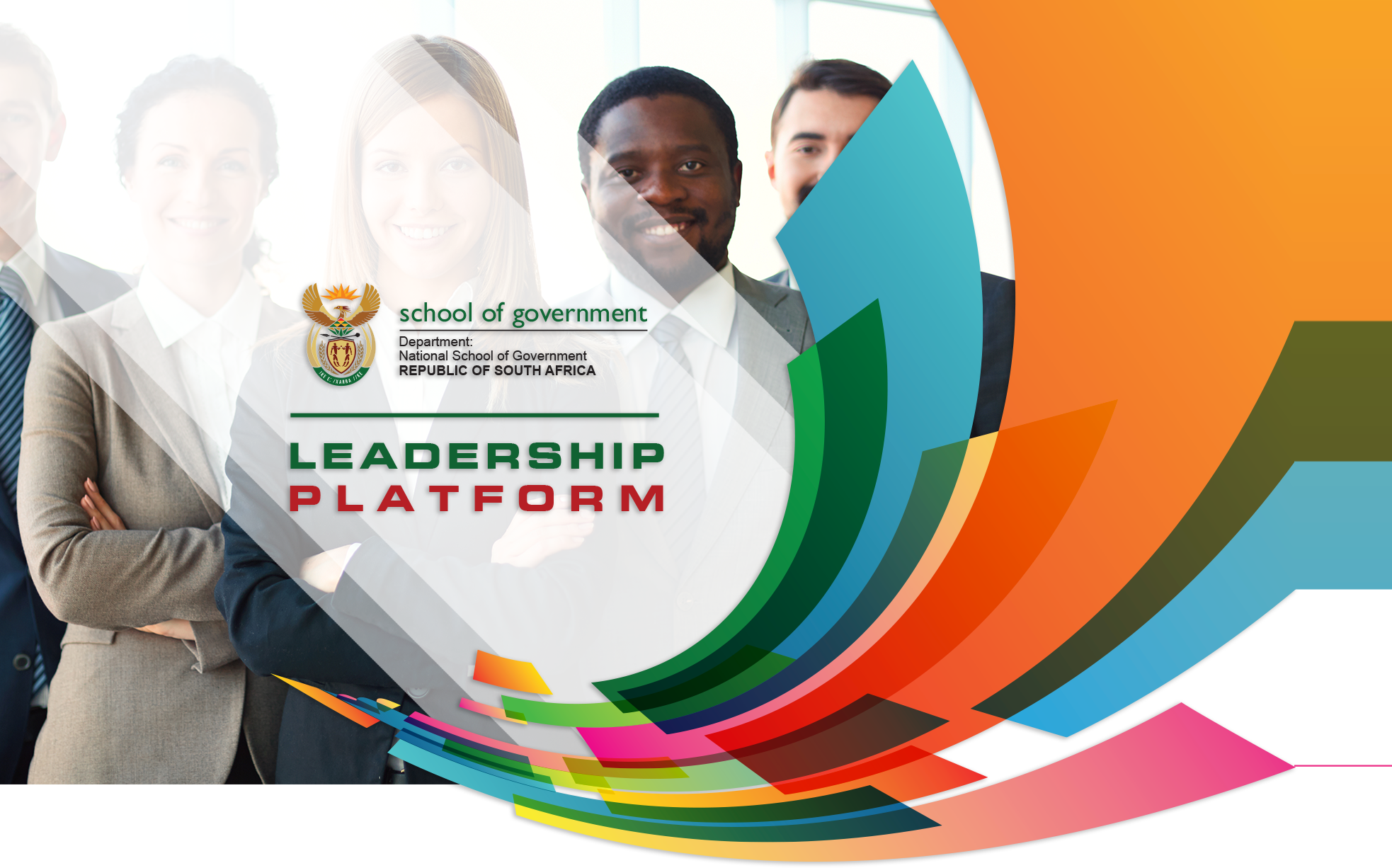 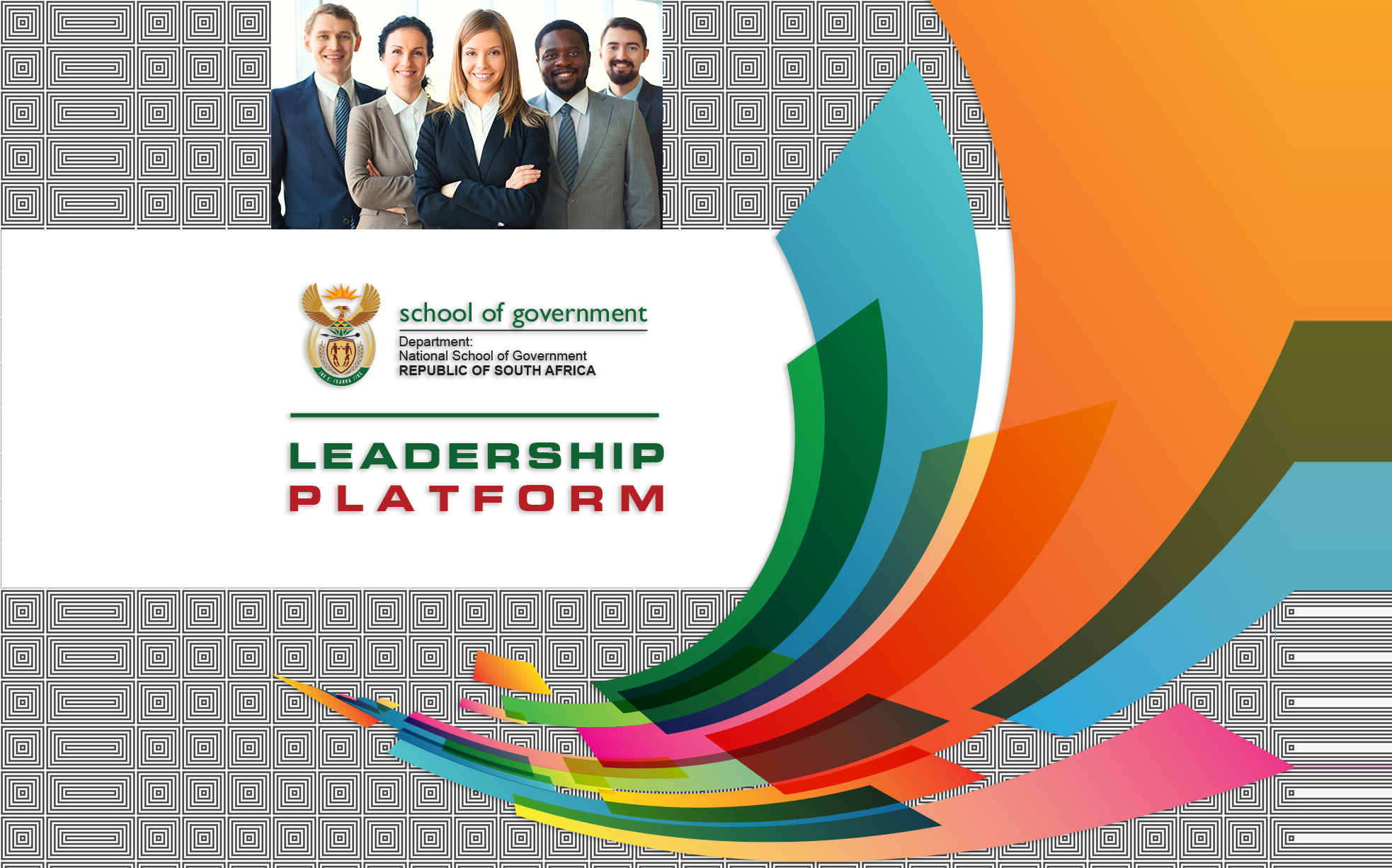 The national programme of building a capable state requires the purposeful involvement of all sectors, not just government alone. Moreover, the leadership is central to stimulating, coordinating and sustaining various initiatives aimed at capacity development, and the realisation of the objectives of the National Development Plan.
The National School of Government has established the Leadership Dialogue Platform, as a participatory and innovative space that draws all sectors together, to harness local and global thought leadership. The Platform uses various interactive modes, including live and virtual format, to promote dialogue and interface on a range of themes on matters of national concern, such as the energy mix, public transport, quality education, social security, land reform, industrial development, social cohesion, and fighting prejudice and racism,

Join us in crafting worthy responses for a people-centred future, through dialogue – “Those who expect to reap the blessing of freedom must undertake to support it.”- Thomas Paine

Objectives of the Seminar

An educated population remains the fundamental platform for meeting most of the other Millennium Developmental Goals (MDGs), and a well-oiled education system is important for many reasons. It is a means to encourage a knowledge movement which reflects the traditional heritage of South
Africa and develops it into a living force for the future. A good education system is crucial, notonly for ensuring that the citizenry are well educated; but also for human development and for the maintenance of socially responsive economic and political systems.
To bring this issue to the fore, the National School of Government has partnered with Charter Academy and Partners for Possibility to deliver a sponsored workshop offering financial literacy skills to school principals. The objectives of this seminar are to provide financial managers at local level with an understanding of:

The participants of the programme will constitute School Principals and schooling staff who undertake procurement as well as School Governing Body Treasurers.

Building a culture of integrity in the workplace always start with YOU, by choosing your thoughts and actions based on humane principles and values. It is about crossing the bridge from ‘I’ to ‘We’ and living the principle of “honesty and integrity” in a culture of service because the most important ingredient in the public service is, simply serve with integrity.
The National School of Government recently hosted an integrity workshop where Professor Howard Richards was invited to give a talk on the topic. Prof Howard Richards holds a doctor in jurisprudence degree from Stanford University, a doctorate in philosophy from the University of California, an Advanced Certificate with honours in educational psychology from Oxford University, and a doctorate in educational planning with a specialization in applied psychology and moral education from the University of Toronto.
He is a fellow of the SARCHi chair in development education at the University of South Africa, a teacher in the Executive MBA programme at the Graduate School of Business at University of Cape Town, and in the Doctorate in Management Sciences of the University of Santiago, Chile.
He has worked with the government of Argentina in the training of police officers in democratic values as part of the democratization process following the end of the most recent military dictatorship there. He now teaches at the University of Santiago, Chile and has ongoing roles at the University of South Africa (UNISA) and the University of Cape Town’s Graduate School of Business program. He is founder of the Peace and Global Studies Program and co-founder of the Business and Nonprofit Management Program at Earlham.
For more information about the workshop please contact Ms Milly Daweti on: (012) 441–6202

Youth in Leadership Breakfast Seminar
On the 29th of June 2017, a Youth in Leadership breakfast seminar was held at the Protea Manor Hotel in Pretoria. This event was generously sponsored by the Community Chest, as a continuation of the dialogue series with youth. The event was attended by university students, young public servants, and young community leaders were addressed by Mr Davids Lorenzo, the CEO of Community Chest. His words of encouragement included a discussion on the state of Africa; under the theme ‘African Age’.
Participants shared their acute awareness about the demographics, noting that in 15 years Africa will have the youngest population. Therefore, the youth would be responsible for development, from food production to technological advances. Mr Davids also spoke about the use of artificial intelligence and provided examples of how technology has leapt forward and keeps influencing how we exist in the world. He encouraged participants to seize opportunities in creating the African Age. He expressed that participants are custodians of the future. He made reference to the sacrifices made in 1976 and the economic opportunities that it has paved for the youth of today.
Ms Daweti then transitioned the programme by introducing the two special guests whose lived experiences were the catalyst for in-depth interaction among participants.
Dr Ntombenhle Gama is a lecturer of Biochemistry at the University of Pretoria. She shared some of her childhood experiences, and how she recalls her first realisation of HIV/AIDS as a health crisis in South Africa. This awareness inspired her to strive towards a career that involves pursuing a cure for HIV/AIDS. She shared her path into science and her love for genetics, and her epiphany around the role of biochemistry in curing diseases between family expectations and a full time laboratory job, she realised that her passion lies instead with academia. The second speaker, Mr Quinton Makelana, was described by participants as one who has graduated from the ‘University of Life’. He was born in Polokwane and lived in different parts of
South Africa and then in the UK. He considers himself more as a citizen of the world. He is a graduate of Law from Monash University. He works in international projects with the US Embassy, and is currently involved in the area of female genital mutilation (FGM). He explained how social evils seem to draw nearer as one ages. His presentation focused on ‘Submission and Servant Leadership’. He shared how a mentorship programme helped him to find the right path and unlocked his potential.
Some of their reflections include: